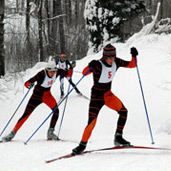 (218) 245-3487 • www.mtitasca.com
With hills and trails available for recreational and competitive use year-round, Mt. Itasca is a community asset that is home to snow-sports athletes and enthusiasts of every age.

Mt. Itasca is one of the only facilities in the country that maintains venues for downhill, snowboard, biathlon, cross-country, ski jumping and Nordic-combined all at a single site. At the heart of the facility is the Itasca Ski & Outing Club, which is proud of supporting ski jumping in the area for more than a century. The center also boasts a world-class biathlon course that is home to the U.S. Junior Biathlon Team, as well as miles of trails available for recreational and competitive cross-country skiers, hikers and runners. The area’s downhill runs have recently been enhanced to include the Area 51 snowboard terrain, with jumps, rails and other topographical essentials to that sport. 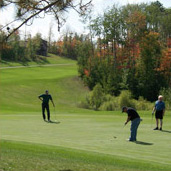 218-245-2217 • 1-888-307-3245 • www.golfeagleridge.com
Located just six miles north of Grand Rapids on Highway 169 in beautiful Coleraine, Eagle Ridge Golf Course truly is one of northern Minnesota’s premier golf experiences. You are invited to come and enjoy all that the north woods have to offer as you play our stunning 18-hole championship course. Overlooking majestic Trout Lake, the rolling hills and meandering fairways make this course a memorable experience for all skill-levels.

Established in 1996, Eagle Ridge now stands as a seasoned up- scale course with all the amenities including a full-service pro shop, clubhouse, full bar and restaurant. Come and see why some of the best golfers in the state make Eagle Ridge Golf Course their northern Minnesota destination.

Eagle Ridge was recognized as one of the top destinations in the 2008 Edition of the PGA Professional’s Guide to Travel publication. Eagle Ridge was also ranked in the “Top 50” courses in Golf Card Magazine that accept the Golf Card discount. 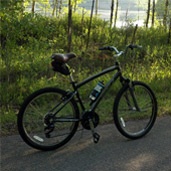 877-637-2241 (mesabi1) • www.mesabitrail.com
Located in northern Minnesota between the cities of Ely and Grand Rapids, the Mesabi Trail is a premier Minnesota bike trail winding through some of the state’s prettiest regions. When completed, the trail will traverse 132 miles and connect more than 25 communities. This superior paved bike trail is well- mapped, well-maintained and the Mesabi Trail also makes an interesting walking path. In 2008, approximately 97 miles of trail will be complete and offer convenient accessibility at numerous entry points.

The longest paved section connects Marble to McKinley (approximately 60 miles through the communities of Nashwauk, Keewatin, Hibbing, Chisholm, Mt. Iron and Virginia to name a few). An additional section approximately 13 miles in length connects Grand Rapids to Scenic Hwy 7. Construction will begin on the link between Scenic Highway 7 and Marble this spring. 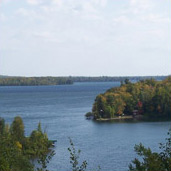 Trout Lake is located within city limits and is 1,890 acres in size with maximum depths of 135 ft. It has 3 public accesses; 1 concrete access in Longyear Park, 1 concrete access in Cotton Beach Park and 1 gravel access at Kom On In Beach. Trout Lake is great for summer or winter fishing with many different fish species including: walleye, northern pike, black crappie, bluegill, largemouth bass, smallmouth bass, tullibee and yellow perch. It is also great for boating and many other family fun activities. 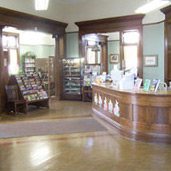 Our Mission… The Coleraine Carnegie Library is a community gathering place where children develop a love of reading, youth and adults expand their knowledge and enjoyment, and the public stays connected to our world – past, present, and future.

Along with Books, DVD’s and Magazines, we have 7 computers for public use and a collection of historical files and displays. Access to the Arrowhead Library System www.alslib.info  Select the latest Books, Audios, and DVD’s and have them delivered to your closest library. Watch for the monthly calendar to see what is happening at our Library. 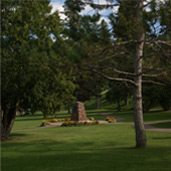 Longyear Park, along Cole Street and Trout Lake, was designed and developed in 1914 by Conrad B. Wolf. The site was originally a cedar swamp full of cattails and bulrushes which first served as the location of an experimental washing plant in the early 1900s. Named after E.J. Longyear, a mining pioneer in test drilling, the park included a labyrinth of walking paths, a fish pond, flower gardens and a gazebo built for band concerts along the lakeshore.

On the hill above the park, the painted American flag was a 1920s project of local elementary students who were each asked to bring a rock to school to help form the design. Carved out of the hillside were paved “baby walks” to permit the easy maneuvering of baby carriages down into the park.

Located at the east end of the park, the pavilion is equipped with a serving area with countertops, cabinets, sink, and serving windows.  The pavilion is available for parties, weddings, and other picnic type activities.  Two bathrooms are located in the pavilion.

The log structure is located on the west end of the park.  It provides a picturesque scene for weddings, parties, and is the venue for the Coleraine City Band concerts on Thursday nights during June and July.

How Cotton Park got its name is really unknown. However, because John C. Greenway had a penchant for naming Coleraine’s streets and the city’s other park after mining and business friends and acquaintances, some assume the park was named in honor of Joseph Bell Cotton.

Mr. Cotton was the Duluth Attorney for the United States Steel Corporation and surely had contact with Greenway. Cotton also acted as a liaison for the Rockefellers and the mining industry.

Early plat maps of Coleraine list the area as Cotton Park. Once this came to be known by residents in the 1980’s, the name was reapplied to the beach and boat landing property.

Today you can find eager fishermen docking their boats at one of the three boat landings on Trout Lake and families sharing a picnic in the park or enjoying a dunk in the lake at the swimming beach. 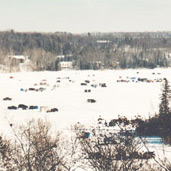 The Coleraine City Band organized February 16, 1907 with 5 members, James Remington, James MacNeil, Joseph Joduin, William Blaine, and E.J. Anderson as the director.  Organized as an all-male band, Coleraine invited the women of the area to join in the 1980’s.  City Band Concerts are held in the Longyear Park log gazebo Thursdays at 7 pm in June and July.  Come at 6 pm for free hot dogs, served in the pavilion, sponsored as an outreach from First United Church of Coleraine and Bovey.

Located on County Road 440 E of Coleraine, (Coleraine Road) Lakewood Cemetery serves the families of the surrounding communities.   The cemetery can be accessed from Coleraine by taking a right onto 440 (Coleraine Road) by the Minnesota Power Building, or off Hwy 169 in the Midway area.

Phone: (218) 245-3525 • http://greenwayrec.org/
The arena has been at 200 Curley Ave in Coleraine since 1961, when it was built by the Troumbly Brothers Construction of Taconite.  Rich in hockey tradition, the arena featured “natural” ice which was maintained by a walk behind barrel type of a “Zamboni”.  In the late 1960’s the arena was fitted with the mechanicals to install artificially cooled ice enabling the arena to be utilized year round.  It is the home venue of the Greenway Raiders hockey team.  The Raiders brought home many trophies to adorn the cases, included are the State Championships of 1967, 1968, and 1992.  Several youth who skated here have made it big in college hockey as well as in the NHL and AHL.   Nicknamed the “Snake Pit” the arena also houses the Emerald Ice Figure Skating Club, as well as the Roller Derby Iron Range Maidens and Attackonites.